Ros is recognised as a musician and music leader who is passionate about the potential for music to promote agency and social change.

She uses her musicianship to create opportunities for performance, interaction and communication in some of the most sensitive contexts, where a musician’s ability to interact and communicate in music is paramount. 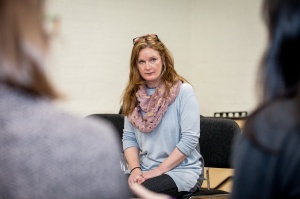 A specialist in working with children and young people with sensory impairment and complex healthcare needs, Ros is a Music for Health Specialist at Lime Arts, where she has developed pioneering training programmes in music and communication in hospitals for students of The Royal Northern College of Music and The University of Manchester Medical School, alongside fellow musician and Music for Health Specialist Mark Fisher. 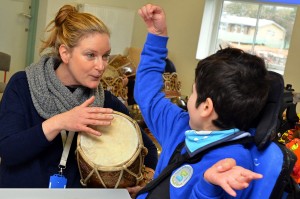 Ros and Catman – Percussion session with the Seashell Trust

An alumna of Yehudi Menuhin’s highly acclaimed charity Live Music Now!, who work with some of the UK’s finest young performers at the start of their professional careers, Ros now works with the organisation in a training and advisory capacity. She is  Chair of the Advisory group for Live Music Now’s Special Educational Needs and Disabilities/INSPIRE programme, funded by The Paul Hamlyn Foundation and Youth Music. Ros has worked with the organisation to transform the learning pathway for young professional musicians on the scheme who are working in special educational needs and disability settings.

Ros has been instrumental in developing klezmer performance and study within the UK. She is a founder member of the Michael Kahan Kapelye at The University of Manchester, the UK’s only assessed klezmer performance ensemble, and, after studying with many of the world’s finest klezmer performers in her early career she is proud to be Head of Faculty for Klezfest 2017, hosted by The Jewish Music Institute.

“Ros, your clarinet sound absolutely made the event. Amongst a sea of string sound you pierced through and charmed everyone.”

― Folk With Fiddles Shindig: March 2015
A graduate of The Royal Northern College of Music, Ros was awarded a bursary to study on the highly respected Performance and Communication Skills Course at The Guildhall School of Music and Drama (1994), and holds a Masters’ Degree with Distinction in Performance as Research from SOAS, University of London, supported by a scholarship from the Jewish Music Institute (2008).
In 2001 Ros was invited as part of a delegation led by the National Campaign for the Arts to meet the Arts Minister, Alan Howarth. In April 2017 it was announced that Lord Howarth, Co-Chair of the All-Party Parliamentary Group for Arts, Health and Wellbeing,  was to publish an Inquiry report into the benefits of arts to health and wellbeing, aimed at Government Ministers and officials, the NHS, Public Health England and local authorities, healthcare staff, artists and arts organisations.